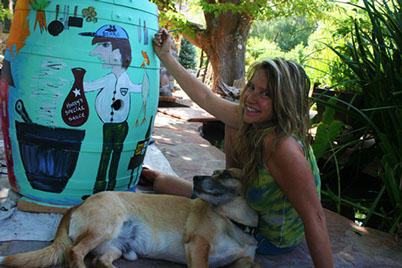 Jacquie Shane likes to describe herself as an "accidental artist". Shane, a Baltimore based rock singer, began experimenting with her idea for "wallpaper and mixed media art" in the fall of 1993. By spring she began selling her creations which ranged from playfully wallpapered wooden apples to funky avant-garde painted/papered furniture.

By the summer of 95` she was a staple in many of Baltimore's high profile art shows and festivals (Artscape, John's Hopkin's Spring Fair, Columbia Festival for the Arts) and unveiled the "Peacebug", a whimsically papered, painted and textured Volkswagen beetle, which received much critical acclaim and was featured in Artscape's art car parade, as well as, the Visionary Art Museum's "Saints and Sinner's Ball".

In the fall of 96`, upon a chance invitation to promote her band "Sheer Khan's" music in England, Shane found herself ensconced in Bath where she wrote music with Tears for Fears guitarist, Neil Taylor, and where her artwork took on more primitive, disturbing, new dimension. Out of this murky side oozed the highly textured, mixed media sculptures and "sculpture paintings" eventually to be known as the "Alien" 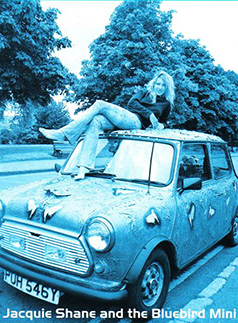 designs. Among these were the otherworldly, reptillianesque "Millennial Throne" (a throne in search of a king), the curiosly hypnotic dreamscape "A Woman's Work is Never Done" (sculpted on an antique ironing board frame) and the "Unlocking Love" totems. Some of these works were exhibited at Three Mill Island Movie Studio's, London, The Bath Society of Artists show at the Victoria Art Gallery, Bath, The Bath Frings Festival) and her art car the "Bluebird Mini" was featured in the May 1999 edition of Miniworld Magazine and shown at Peter Gabriel's Womad Festival in Reading England.

After returning to the states, Shane created two sculptures for the City of Baltimore's "Fish Out of Water" project and developed the playful "Wild Eyed Cat" series. Jacquie's love of texture and color is the common thread that courses throughout her work. Her curiosity, sense of humor, and flare for the dramatic drives the evolution of her work whose "mozaic" of tensions ranges from "psychedelic primitive" to " industrial organic".

Born in Yuma, Arizona, Jacquie's "follow the yellow brick road" approach to life has led her back to Arizona, where she currently resides near Sedona.